As most SEOs know there has been a substantial Google Update last week. SEO Journalist Barry Schwartz previously wrote an article in which he himself gave this update a name instead of Google. Yes, you read that well: He calls it the Google Maccabees Update. 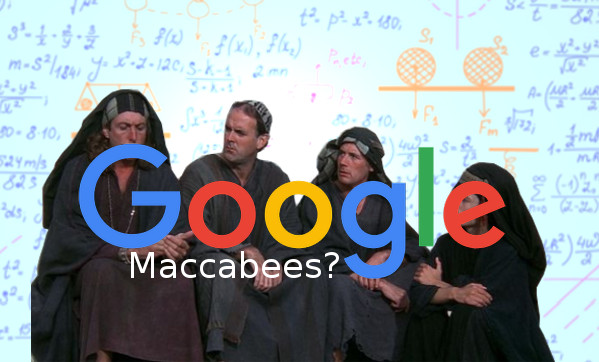 I needed some time to process that. I honestly did not know how to respond to this.

As far as I know, it has been a while since someone who does not work for Google named an update. I’d prefer if Google did it.

Earlier this year we already had to deal with the big Google Fred show and to be honest, I didn’t think it could get any worse. But apparently, it can!

I just finished an article about this so-called Maccabees Update on seonieuws.com (the most popular Dutch news website about SEO) and decided to make an English version of it so I can share it with you guys.

For the sake of clarity: Barry Schwartz is someone I respect a lot. I have been following him for years and I read almost everything he writes. But that does not mean that I will always agree with him.

Nobody is perfect, and in my opinion, Barry is going way too far by naming Google Updates himself. As far as I am concerned, there has been no Google Maccabees Update in December 2017 but just another Nameless Google Update.

That’s my opinion, who cares? Right? Let’s ask some people!

I actually really wanted to know what other people thought about this, so I asked a couple people with a lot of experience in the field how they felt about this issue. They were really helpful and had to say a couple of things which I’d like to share with you.

Furthermore, Barry himself also got involved in the discussion and his reaction was pretty cool actually. I respect Barry Schwartz even more now because of the way he reacted. Fame has not risen to his head yet.

Does that mean ill always agree with him? Nope, in my eyes respect and agreeing are two very different things.
Nobody should be unquestionable the way I see it. Being unquestionable is a bad thing. I’m pretty sure Kim Jung-Un would disagree, but he isn’t reporting the SEO news, so we’re okay.

Here is what Barry Schwartz had to say about the issue:

In fact, I agree, you should not take my ‘reporting’ as fact. It is far from it. I cover search community chatter and often for the updates I also add in data from the automated tracking tools. But people should use their own brains.

I am 100% overrated and honestly, this is the first update I personally ever named. The other names either come from Google, WebmasterWorld, Gary (i.e. Fred) or other sources. I wouldn’t name it if I really didn’t think it was something bigger than the average update and also a significant update. I cover chatter, sue me.

But what do other SEOs think about this?

Now let’s go on with the opinions of the people I actually asked for their opinion myself. Let’s start with Alan Bleiweiss who pointed out that naming Google Updates used to be done by the SEO community before. So apparently it’s a bit less crazy than I thought it was. However, this would still be the first time that Barry gives a name to an update himself. I could write more about what people said but why don’t we let them do the talking themselves:

Let’s recall how Gary Illyes, being fed up with people asking “did an update happen? What was the update?” And where those asking failed to accept the fact Google makes hundreds of updates a year that change the landscape, resulting in the question becoming tiresome, decided to jokingly say “from now on, all updates are Fred”, upon which Barry and others took to asking “was the latest update part of Fred?”… And Fred became a thing of hilariously stupid epic discussion from serious people.

Barry is not a traditional journalist regarding many aspects of what he does. He just reports on what he reads and hears and sees, without much footwork beyond that, and beyond asking Gary “was that an update? “…

(left out a part here talking about Google Fred)

The bottom line here is it’s not wrong of Barry for having called this latest update the “Maccabees” update. We all seek to understand what goes on with Google, and when Google themselves don’t give a unique name to any one of their hundreds of annual updates (at least the more prominent ones), it’s only natural to want a name to refer to. Hell, Even the first roll out of Panda, was called “The Farmer update” by the industry before Google officially named it “Panda”. And that was back in 2011.

People still pay attention to updates? Seriously, I have zero problem with anyone naming minor things that look like they might be updates. Plus, if anyone has earned the street cred to name them, it would be Barry. He’s one of the few people still around that pays attention to it all every day.

As Steve said, more or less, if anyone can spot an orphan in need of a name, it would be Barry. Every Friday he turns up with his update. It’s hard to think of anyone else with their finger on the pulse to the degree that he commits and, since Google no longer seems interested in naming things, having someone like Barry filling in the blanks for us can’t be a bad thing. If only because it’s helpful to know that we are talking about the same thing.

I have yet to see any evidence of an “update” by Google. But if you’re going to refer to the conversations of SOME Web marketers in relation to changes in traffic around a specific time frame, then you need an identifier. Already a number of people have extended the boundaries of this “update” back into November so it’s looking less and less like an update but no one is going to write out “That mid-December 2017 Change in Traffic Noticed by Some Website Operators”.

Me (Kim Pittoors): Right, so you are okay with it?

Not really, no, but Barry usually just tries to cover the discussions. Sometimes he does get a little enthusiastic. Maybe sometimes he knows things the rest of us don’t, given his close relationship with Google (in a journalistic sense). I believe they trust him.

In the absence of Google naming them someone has to.

The updates used to be named by WebmasterWorld. The moderators and Brett Tabke would throw around some names and then Brett would decide. I’m pretty sure that’s how the 2003 Florida Update got its name, as it preceded the Orlando Florida Pubcon by a few months. I wasn’t a part of naming that update because I’m pretty sure I wasn’t a moderator yet at that time.

I have no problem with it. Google doesn’t even normally even acknowledge updates anymore, much less name them. It helps to be able to discuss major updates when they have a name assigned to them. So whether it’s Barry or someone else, referring to an update by name is infinitely easier than it would be as “Update# 102547.360.25.
Another aspect of that is if you want to research a particular update, to see what results or what testing may have been accomplished, a name allows people to share “Hummingbird algorithm” content or “Panda filtering”… which, in turn, allows the search engine to show you those results in the SERPs. No name… no continuity.

If you’re interested in facts and it isn’t personal, then maybe calling Barry out in your title and calling him over-rated isn’t the best approach. 😉
Very few people in our line of work put as much time and effort into keeping the rest of us informed about what’s happening around search. Seems like a totally undeserved slap in the face to me.

context of this quote

Why not? I think it’s brilliant

It’s misleading on the part of Schwartz, because people will actually think there’s been an update, and that’s what it’s name is. Still, others will think anything is “cute” or “clever” unless it actually affects their business in a serious way.

Googles Danny Sullivan recently tweeted about the Google fluctuations Barry Schwartz refers to as the Google Maccabees Update. He said that this is not a major single update but multiple small updates.

Here are his Tweets:

Various reports are out there that Google had an “update” to search last week. This is our statement that says nothing about a *single* update:

“We released several minor improvements during this timeframe, part of our regular and routine efforts to improve relevancy.” …

In any given week, there are various changes that happen with Google’s search algorithm. Many are unnoticed. Many are minor. Last week was like that. After a few publishers reported changes, we checked and didn’t see any major or single change on our end.

Reports calling this a single “update” or calling it “Fred” don’t reflect what we actually said: there were several minor changes that happened as they routinely do in any particular week.

There was no single update. I suppose some might find it useful to give a name to the general flux period, but I think it’s important to understand there were different changes happening — as happen in any week.

I’m honestly very curious what you think? Am I crazy or is Barry really going too far? Let me know via the comment form at the bottom of this page.

One thought on “Google Maccabees Update or BS? Is SEO Journalist Barry Schwartz going too far naming updates himself?”