Yesterday I stumbled upon yet another a scraper site linking in. I see those much too often and find it quite frustrating that people are still doing this. If you would have asked me about this before, I would have told you that these kind of black hat SEO techniques no longer work. Because they shouldn’t. But guess what, I was totally wrong! (But don’t do it anyway. It might hurt you in the Future!) 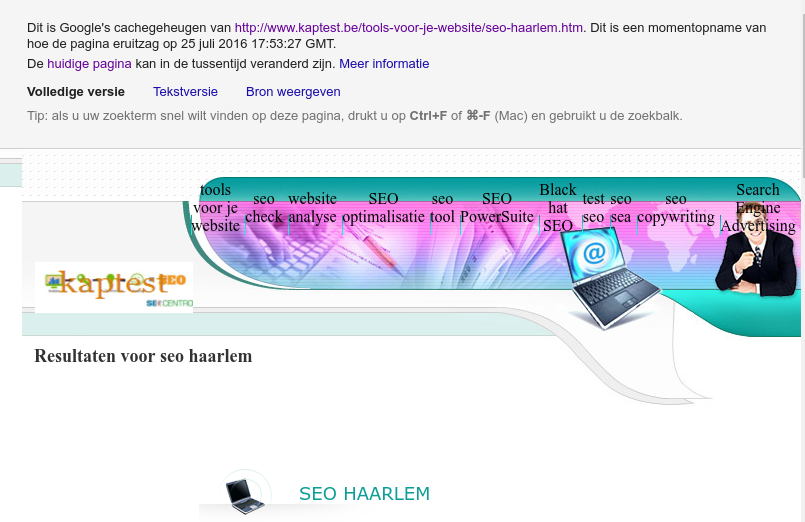 After a little investigation, I discovered a Belgian firm (iPower from Gregory Lienard) selling links quite successfully trough a service called Keyboost (Not linking to it!).

Having 69 reviews with an average of 4.3 stars on their Facebook page. Almost all people were very positive about the service.

But when I looked at their website I could not find any explanation about how this service works. They are very vague about it.

But they had some text about backlinks and they also mention that no on-page changes are required to participate.

So you can fill in the rest for yourself. But there is no need to. I also found them admitting its link based in Dutch on Facebook. After some research I discovered that this firm has 2000/3000 domains filled with scraped content.

@methode @JohnMu @rustybrick Well. it was my first time and I felt quite lonely over there 😉

Whatever they are doing, it works very well (in the short term at least). After seeing all the good reviews, I went to Google and Googled “Keyboost complaints” in Dutch.

I was amazed to see how they successfully spammed the the Google search results way past page 10. There are still some real sites appearing on top but almost all other results where clearly search engine spam.

This is a screenshot of what I saw: 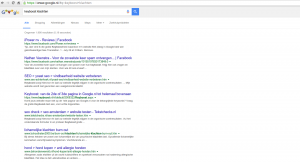 This triggered my interest. How are they doing this? And even more important? Why doesn’t Google detect it? How come this works?

Those questions will remain unanswered. Only Google knows! But I did some digging and this is what I found..

Scraping content, Cloaking Googlebot and using rel=”nofollow” to guide the link juice where they want

When seeing the scraped pages the first time I figured it might be some kind of amateurish negative SEO tactic. But when I had a closer look at the source code of the Keyboost pages I saw that all scraped links had a rel=”nofollow” attribute.

And that’s comforting even though Google has stated earlier that you shouldn’t be concerned about nasty backlinks from scraper pages. They say they will be able to see the difference, but if they do, why is this Keyboost system working then?

After having a look at the source code I figured something must be hidden from me. Why would they have create pages like this? All links were nofollow, so none of the linkjuice was passing trough. Search Engine Cloaking was the first option that came to mind so I went back to google and checked some of the cached versions.

This is what I saw:

In the Cached version I saw that there where eight dofollow links on top of the page. The first three where links to their own websites, and the other five are very probably Keyboost Clients. My theory: They are scraping content, cloaking Googlebot and using rel=”nofollow” to guide the link juice where they want. (To be more accurate, the nofollow is preventing it from going where they don’t want it, but the result is the same.)

But how do they escape from the dangerous Penguin? Well I don’t know! And neither do I know if they will be able to keep doing this. And the saddest thing is, this could have serious consequences for the people that are unknowingly participating in this linkscheme. And I know that those people also have kids to feed, some of them are my clients.

What will happen to the businesses of those people when the new Real-Time Penguin really comes? If it comes by the way.. We have been waiting for ages now. Hopefully this new version will ban this kind of Black Hat SEO techniques forever!

Google Penguin 4.0 has been launched by Google. Lets see if this update knocks them down.

Google Penguin 4.0 seems to hurt the keyboost system. But its not dead yet. The number of keyboost ‘scraper sites’ in the SERPS is lower than before, but I still see some. And iPower (the company behind keyboost) is still receiving good reviews on Facebook (those might be fake anyway, not sure). The beast has not died completely.

The Keyboost system still seems to work. So I decided to write another blogpost about this called: Keyboost Linkscheme still working well despite Penguin 4.0

Beeing a professional SEO I want to offer quality services to my clients. I play by the book because I would never want to risk damaging businesses and families for my own profit. This also means that SEO is a lot of work. You need to think along with your client and understand their business to make good websites. My goal is to make sites that do well in Google and also convert visitors into leads.

How can I sell this to my clients if these kind of old black hat SEO techniques still seem to work? It won’t work forever, thats for sure! But in the meantime it does work doesn’t it? I would’t encourage you to participate however. It might be very damaging for your business on the long term!

If you speak Dutch you can read more about Gregory Lienard, iPower and Keyboost here. It’s an article written by Nathan Veenstra from Optimus Online based on this post.

Do you have knowledge, questions, comments or anything else that might add to the discussion? Feel free to leave a comment.